Smarter than Climate-Smart: Agroecological Strategies for Food Security in a Changing Climate

Acknowledging that agriculture is both under threat from the climate crisis and a driver of it, the UN Food and Agriculture Organisation (FAO) introduced the concept of “climate-smart agriculture” in 2010. It was defined as agriculture that “sustainably increases productivity, resilience (adaptation), reduces/removes greenhouse gases (mitigation), and enhances achievement of national food security and development goals”. Although these read like noble goals, the concept has been a bone of contention from its earliest days.

Million Belay is the coordinator of the Alliance for Food Sovereignty in Africa. For more than two decades, he has immersed himself in issues of sustainable agriculture and the rights of local communities to seed- and food-sovereignty. Perspectives spoke to him about the specific challenges of food security on the continent.

Perspectives: The African Union and the New Partnership for Africa’s Development, alongside many African governments and research institutions, promote climate-smart agriculture as a solution for food resilience in the context of the climate crisis. Do you see it as the best way forward for the continent?

Million Belay: I am not surprised that these institutions see climate-smart agriculture (CSA) as a solution. This is because the bulk of the support to these institutions comes from the proponents of industrial agriculture. The proponents of CSA – including the FAO, the World Bank and developed-country government promoters – have formed in 2014 the Global Alliance for Climate-Smart Agriculture to help them push their agenda under the guise of providing a solution to the climate crisis. Since then, private corporations such as Syngenta, Yara, Kellogg’s and McDonald’s have also become actively involved.

CSA advocates to increase sustainable production, using agriculture as a climate-change adaptation strategy, promoting practices that reduce emissions and avoid deforestation and so on. But personally, I do not think that CSA is the best strategy for climate-change adaptation. CSA is a technical fix and does not address the fundamental problem of the climate crisis. It does not outlaw agrochemicals, genetically modified crops, large-scale industrial monoculture, biofuel plantations and the commodification of carbon and the creation of priced carbon rights in the name of “green growth”. CSA thus presents a continuation of business-as-usual industrial agriculture, in which farmers are increasingly dependent on agrochemical corporations for external inputs and global commodity-markets for sale of their products.

If this is not the best way forward, what makes climate-smart agriculture so attractive to the continent’s governance institutions?

What makes it attractive is the financial and technical support coming from those who have an interest in pushing their agenda under the guise of increasing productivity and climate resilience. Even more worrying is the narrative under which the financial and technical support is operating. There is a very powerful narrative that is designed and packaged to convince African countries to support CSA and related initiatives.

In short, the narrative runs like this: “Africa’s population is exploding and, in a few years’ time, countries’ agricultural systems will be overburdened and unable to support the burgeoning population. Therefore, we need to bring in agribusiness to inject funding and technical skill to support the transformation of agriculture. For production to increase, we need to bring in hybrid seed and use agrochemicals. We also need to bring new forms of knowledge and put land in the hands of those who can produce more.”

This narrative is pumped into the mind of African elites and hammered into the population through media and other forums – but is there sufficient conversation about the health, environmental, cultural and even human-rights impacts of these policies? There is a need for another narrative. Yes, it is true that population is increasing and we need to enhance the productivity of our seeds. But we can do that through agroecology. We can build our soils and protect our ecosystem and find solutions through combining the wisdom of our farmers with conventional scientists.

How does agroecology differ from what is packaged as climate-smart agriculture, and why is it a better solution for food security in these conditions?

Agroecology understands that the problem in our food system lies in the economic model that the neoliberal agenda espouses. Agroecology initiatives aim to transform industrial agriculture by moving away from fossil-fuel-based production and encouraging small-scale production systems based on local innovation and resources. It recognises and promotes the rich knowledge that food producers have about food systems.

Since 60 to 80 percent of farmers in Africa are small-scale farmers, agroecology fits them very well. But this only happens if their rights to their land, seeds, water and other systems are respected. Research by the Alliance for Food Sovereignty in Africa (AFSA) shows that agroecology increases productivity, is good for local agrobiodiversity, produces diverse, healthy and nutritionally rich foods and increases income.

CSA uses approaches like “conservation agriculture”, a concept for resource-saving agricultural crop production that was successful in the US and Australia when done on a large scale. It did not show similar results in small-scale farms in Africa. More than this, such approaches do not address the structural and political problems which are at the heart of the food system.

I do not think that focusing on fixing problems at the farm level will address the crisis at the macro level, which is the main culprit in perpetuating poverty. Agroecology is about democracy at the local level; it is about recognition of the huge contribution of food producers to our food system; it is about an economy which is based on connecting food producers and consumers and which is circular; and it is about rethinking the economic and market agenda. 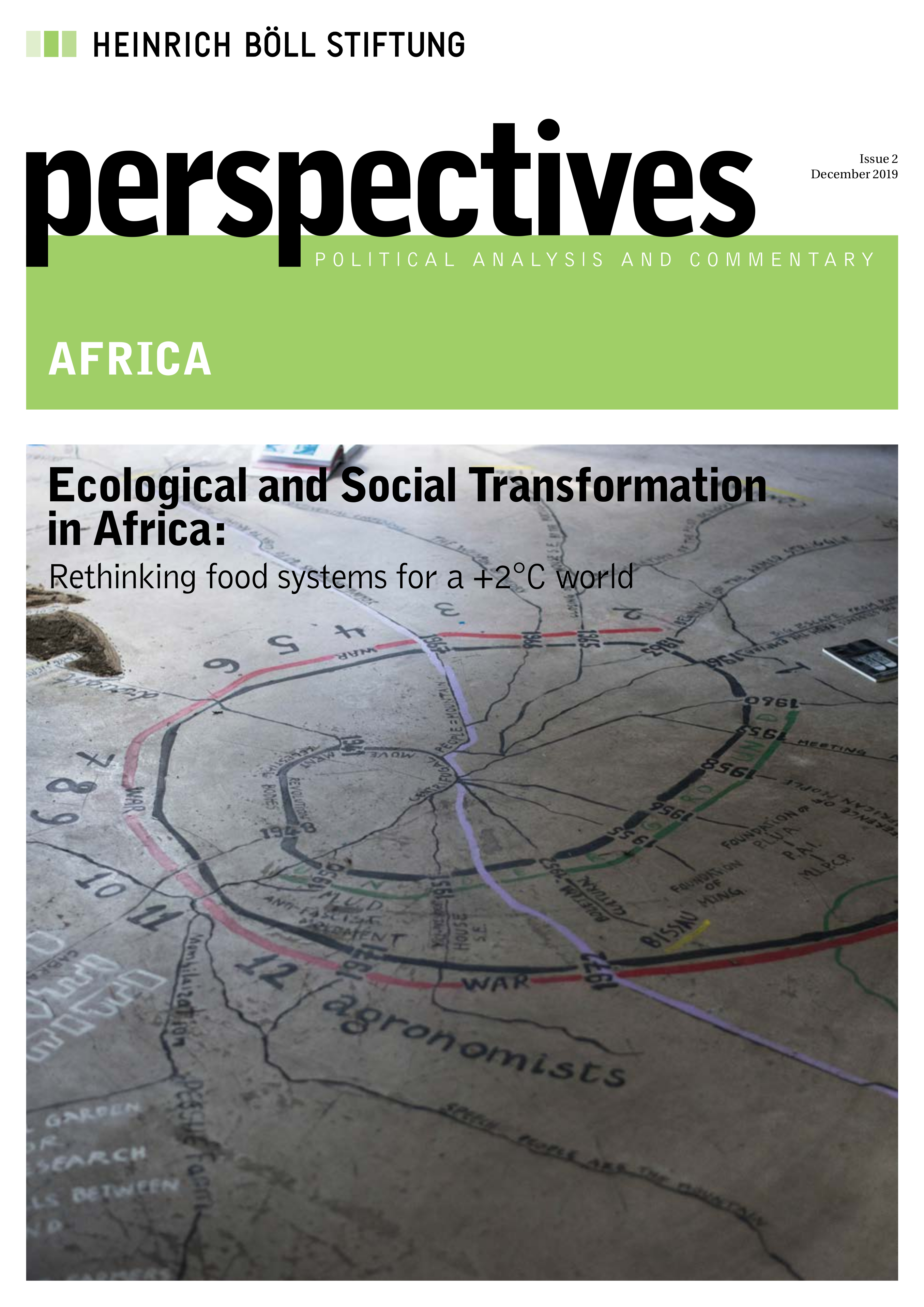 What would food production and consumption look like if agroecology were adopted on a mass scale?

Large-scale adoption of agroecology means, first of all, accepting at the political level that the core source of the problem is the political appropriation of the food system. It is about countries taking on the responsibility of feeding their populations with healthy and nutritious food without harming their environment. At the landscape level, it means working extensively in regenerating the soil and the biomass. It means implementing participatory research, where farmers and scientists define the agenda for research and explore solutions together to enhance the production of nutritious and healthy food. It means reallocating the subsidy from agrochemicals to agroecology. It also means massive consumer education, where people are taught to choose healthy and diverse food instead of packaged and sugar-laden foods. In general, it means a political commitment for a fundamental food-system transformation.

I am not sure where this argument comes from. I think it emanates from false beliefs that agroecology does not increase productivity. It has been demonstrated that it can. I agree that it will be difficult to transition to agroecology in a year or so, but the focus on soil regeneration and increasing plant biomass will gradually increase productivity and will even surpass that of conventional agriculture. My personal experience in Ethiopia and AFSA’s research have shown that agroecologically produced food has markets. I know the focus in agroecology has to go in tandem with consumer education, which is happening in Africa, to create enough markets for agroecological products.

I think there needs to be a broader level of integration among policy frameworks related to food. Policies related to agriculture, environment, health, trade, education, etc. need to be coherent. In so many cases, countries may have a very good policy on nutrition but the trade or agricultural policy goes against that. This policy incoherence leads to inefficiency of efforts and exposes the population to numerous health and economic crises.

Analysis
Africa is a continent rich in land, fisheries, natural resources and biocultural diversity, all of which are critical assets for a well-functioning food system. Despite this, Africans remain some of the most food-insecure citizens on the planet.
By Busiso Moyo and Dr Laura Pereira

Interview
Small Scale Women Farmers Organisation in Nigeria (SWOFON) is a coalition of women farmers’ associations and groups across Nigeria. It was started with the support of ActionAid Nigeria in August 2012 to advocate for and support women farmers, especially those in rural areas, to spur rural village economic development and increase food production.
By Azubike Nwokoye

Food Security in Tunisia: A Need to Move Back to Sovereignty

Analysis
Since the end of French colonisation in 1956, successive Tunisian governments have managed to ensure access to healthy and sufficient food for the vast majority of its citizens.
By Aymen Amayed