The New Image of Africa in Black Panther

Wakanda, the fictional home-country of the superhero Black Panther, might be set in Africa, but the terms of its representation were crafted in Hollywood. The child of Marvel and Disney, birthed by American director Ryan Coogler, is not, strictly speaking, an African project. Yet the movie sparked a special interest across the continent.

The power of the film lies in the completely novel image of Africa it presents to Africans. In other words: there is a good chance that Africa and the rest of the world may not have seen the same movie. Others saw a Marvel Comics blockbuster decked out with all the usual cookie-cutter thrills and frills. Africans saw all of that, and a whole lot more. They saw in Black Panther an “African portrayal from an African perspective”, as the actor Danai Gurira (who played Okoye) put it during the Johannesburg press junket.

The Guardian in Nigeria, South Africa’s Mail & Guardian, and Kenya’s Daily Nation ran column after column, teasing out the resonances of the film for their readers. Social media was awash with outpourings of support. From sold-out showings in Addis Ababa to multiple-city premieres attended by A-list celebrities, there is no doubt that the movie struck a chord with African viewers. Less than a month after its release, Atiku Abubakar, Nigeria’s former vice-president and current presidential aspirant, used it as a campaign platform in an article on Medium titled “Black Panther: A Good Film with Many Lessons for Nigeria”.

Wakanda is not the first fictional African world to hit the big screen or circulate globally in popular imagination. However, the movie offers a new way to see Africa on the silver screen and, more broadly, in the world of fiction. Something sets Wakanda apart from, say, Zamunda in Eddie Murphy’s Coming to America, Kukuanaland in Ryder Haggard’s King Solomon’s Mines, or the many other fictional African spaces in the Marvel Comics universe. Zamunda is small, closed-off and timeless in the way Disney castles are – a blown-up miniature of a world trapped in a jewel box. The Africa we find in Kukuanaland, built largely on the racist fantasies of 19th-century England, is incomprehensible.

Wakanda is different, and not only because it is a highly advanced civilisation. Unlike the purely aestheticised Africa of Zamunda, Wakanda is a fantastical African world sprouted from real-world elements of African life. The costumes were inspired by designs and fabrics sourced everywhere on the continent, from Accra to Maasai communities. Parts of Black Panther’s score were composed and recorded in Senegal, where Swedish-born Ludwig Göransson collaborated with Senegalese singer and guitarist Baba Maal and other local musicians. Wakandans speak Xhosa, one of the official languages of South Africa. The chief of the Jabari people has a Nigerian accent.

For non-African moviegoers, Wakanda might appear “African” in a broad and, perhaps, clichéd sense. But African viewers are able to see the source material in the finished product. Because they know which parts are real, they can better appreciate the futuristic transformation that takes place. In this sense, Wakanda is always slipping into the frame of the real Africa and vice versa. The African viewer can close the gap between fiction and reality and, doing so, set off the utopian impulses in the film.

By “utopian impulse”, I mean the aspect of the film that invites the spectator to ask: “What if Wakanda were Africa?” or “How does Wakanda hold a promise of what Africa could become?” One of the most politically resonant moments in the film is the opening sequence. Set in Sambisa Forest, it is built on the kidnap of the Chibok girls by Nigerian extremist organisation Boko Haram, which Nakia (played by Lupita Nyong’o) helps to foil. We can’t overestimate how resonant the Sambisa scene was for Nigerian viewers. Watching it, they were able to imagine a world in which the 276 schoolgirls are rescued, a world in which Boko Haram is defeated, a world in which a community is not bereaved of their beloved children, and in which the hashtag #bringbackourgirls is never coined. Such a bone-chilling act of violence against the feminine body would never have taken place if there were a Wakanda and a Nakia to intervene. The utopian impulse in art straddles the distinction between what could have been and what is yet to be. For Nigerians in the audience, and perhaps some of the Chibok family, seeing what “could have been”, had Wakanda come to the rescue, raises the possibility of what “might be” in a future, however distant. 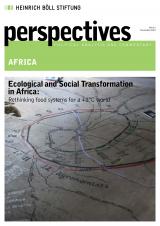 The utopian politics of the film rely heavily on Coogler never straying too far from Africa as we know it. But this reliance on the “real” Africa has its problems. The characters of Shuri, Nakia and Okoye are all powerful figures of femininity. But their revolutionary quality as representations of black femininity stands in sharper relief when placed next to the figure of the Chibok girls as femininity-in-crisis. In these moments, the movie seems to exploit the real Africa – or, at least, such images of dysfunction most resonant for Western viewers, in order to provide justification for the utopian Africa the movie desperately needs to render believable. Secondly, placing Wakanda too close to the actual Africa is aesthetically limiting. Science fiction is a transformational art. It is fiction as metamorphosis. Space, bodies, objects are remade to conjure the openness and unknowability of the future. If Wakanda—its music, language, markets, etc. – looks too much like the actual Africa, it is because Coogler didn’t quite succeed in working out the terms on which Africa could truly inspire a futuristic aesthetics. Then again, art does not have to be perfect. It just has to be revolutionary. Black Panther, for all its representational issues, offers a revolutionary way of telling the African story to a global audience.

One of the awe-inspiring attributes of Black Panther is the sheer scale of the production. This was something the continent had never witnessed before on the silver screen. Africa had never before been the central focus of a narrative so epic, featured on screens so large, and watched by such a populous and international community of fans. This was Africa writ large.

Cameroonian philosopher Achille Mbembe echoed similar sentiments in a Facebook post, praising the movie as marking “a return to a spectacular scene and a global dimension, which many, since the beginning of the modern era (for us the age of slave trafficking, subjugation and dispersion), have stopped dreaming – the rise of a ‘black nation’ standing, powerful and singular, within humanity”. In Black Panther, the world revolves around the axis of this “black nation”. The final scene in the movie is the crux of this dream of which Mbembe speaks: T’Challa, king of Wakanda and Black Panther’s real identity, stands before the United Nations, telling a room full of world powers that Wakanda is ready to lead the world to greatness.

Contrary to popular opinion, Afrofuturism is not only about producing futures. As the science (fiction) of black world-building, it is just as much about re-imagining the past. Kodwo Eshun, one of Afrofuturism’s foremost thinkers, reminds us that Afrofuturism is an attempt at “reorienting the intercultural vectors of Black Atlantic temporality towards the proleptic as much as the retrospective”. This simply means that Afrofuturism is that sweet spot where the difference between remembering the past and dreaming the future breaks down.

Black Panther is set in two parallel histories. One follows the aftermath of Africa’s colonisation. This history accounts for the poverty and weakness of the Wakanda that the world knows. But behind this façade of poverty, Wakanda conjures an alternate history in which Africa is the true world power, controlling enormous wealth and weaponry, effecting peace and security in various parts of the world, while maintaining a stable government at home. Wakanda easily becomes the figure of a utopian imagining of Africa as a world power. It tells us that there is a Wakanda buried somewhere inside the postcolonial wreckage of Africa’s many crises. It tells us that what we are today is simply the disguise of an incognito existence. The Africa of now becomes a mask of suffering that is ready to transform into the mask of the superhero at any moment. But the most significant achievement of the film is to project a world future tethered to the heroism of an African community. In the narrative of blockbuster superhero movies, the survival of the world is always at stake. But what counts as “the world” is always exclusively represented by a Western city. We root for the survival of Gotham, in part, because we feel a bond that lets us imagine that our fate and that of Batman’s city are intertwined. In the sci-fi tradition, not all worlds are permitted to represent humanity. Until T’Challa, we could not take for granted the powerful idea of a Xhosa-speaking hero standing between the world and the apocalypse. Africa had not stood as a global surrogate, such that the fate of humanity would rest on the fate of an African hero and his community.

This is why, as Mbembe noted in his Facebook post, Black Panther lies at the intersection of Afropolitanism and Afrofuturism. If we understand Afropolitanism, not in the Taiye Selasi sense of an identitarian mythology of the self, but as a kind of African world order, a way of organising space around Africa as the figure of power, Afrofuturism becomes the aesthetic mode of bringing that world order into being. Afrofuturism projects Africa and blackness as what is at stake for the future. In so doing, it fulfils the Afropolitan desire to make Africa and blackness the axis around which the world and history turn.