‘Can They Just Pay Me Before I Die?’

Despite winning a R5 billion settlement in 2018, miners who contracted TB and silicosis at work and the family members of those who died are still waiting for that payment.

In May 2018, five mining groups agreed to pay R5 billion to settle a class-action suit involving thousands of mineworkers who contracted tuberculosis (TB) and silicosis at work. The high court in Johannesburg approved this settlement in 2019. But two years later, the trust set up to administer the compensation process still hasn’t paid them.

According to the Justice For Miners campaign, fewer than 10 claimants have been paid by the Tshiamiso Trust so far. There remains a backlog of more than 100 000 unprocessed claims from sick miners. The trust can only settle these claims once the Medical Bureau of Occupational Diseases (MBOD) has processed them in the statutory compensation system.

“The wait since May 2018, and since the establishment of the trust in February 2020, has been a source of frustration for our prospective claimants, many of whom are old and ill,” May Hermanus, chairperson of the Tshiamiso Trust’s board of trustees, said in a statement. “Where they have passed away, the wait has been the ordeal of their dependants. The trustees and the management of Tshiamiso are painfully aware of this.”

Such an admission, without any action, means nothing to someone like Nogcinikhaya Kwili, a 53-year-old widow from Cala in the Eastern Cape. “My husband contracted TB in 1997 while working for Harmony Gold mine. Since then, he never became better. Instead, he was becoming worse each day. In 2005 the mine retrenched him because he was no longer fit to work underground,” Kwili said.

“He took his TB medication but never got better. We did not know anything about silicosis till we went to Groote Schuur Hospital in 2012; that is where we were told he has silicosis. We were told to seek legal advice so that my husband can get his compensation.” 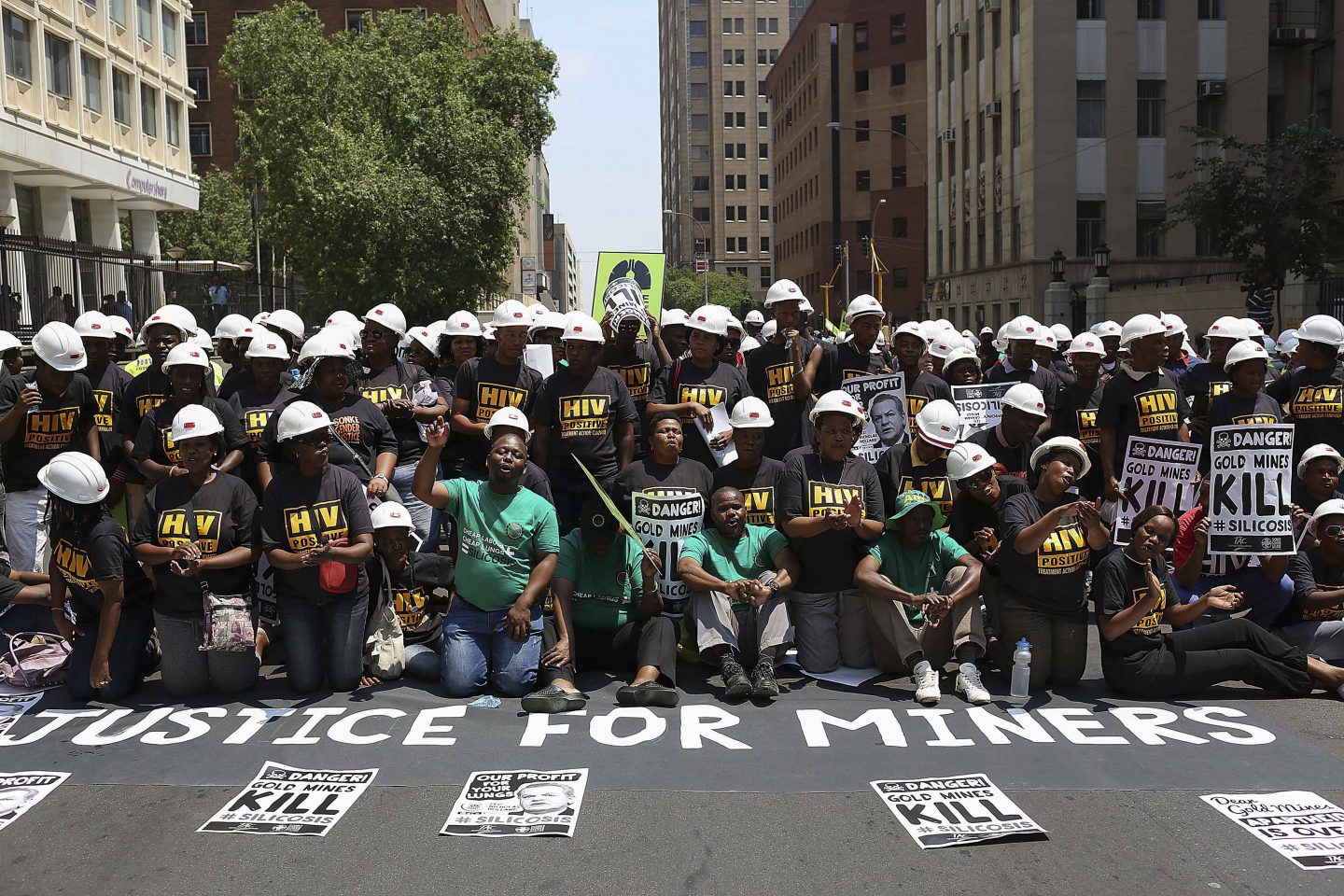 “The MBOD has not reported to Parliament for many years and is accused of corruption. Applying for compensation governed by the ODMWA Act [Occupational Diseases in Mines and Works Act] is also very bureaucratic and onerous on the claimant, who often has already returned to rural areas or back to the migrant labourer’s country,” said Catherine Meyburgh, who works with the Justice For Miners campaign.

“Dependants whose loved ones have passed away are not aware that if their family member worked [in] South African mines, it is required that the body parts are sent to the NIOH [National Institute for Occupational Health] for the autopsy to diagnose occupation diseases, which would ensure the dependants are compensated [with costs covered by the South African government].”

Meyburgh says one of the problems is that the potential claimants are often unaware of their right to compensation for occupational diseases. The Justice For Miners campaign is calling for the government to take part in facilitating the paying of both statutory compensation and the Tshiamiso Trust claims.

The ‘thank you’ we get

Kwili’s husband, Khayalethu Kwili, passed away in 2014 while still trying to get compensation from Harmony Gold. “Two years after the passing of my husband, I did follow up on his compensation. I tried to get help from the Tshiamiso Trust but I was told that my husband’s compensation is with another trust called Qhubeka.”

Kwili then contacted Qhubeka. “I was told that they have tried locating me without success, therefore the money has lapsed. My husband dug gold for 25 years making the economy of this country better, and this is the ‘thank you’ we get. He is no more, he died because of the mine sickness. The kids and I are left with no one taking care of us.”

The Qhubeka Trust had not commented by the time of publishing.