The Nigerian community in China is diverse and complex. Outside the gaze of Western media, much remains unknown about these people who have made China their home and the contribution they make to Nigeria’s development and Sino- Nigerian relations. All too often, academic journals and Nigerian newspapers focus their attention on illegal migration, drug trafficking, crime and imprisonment[1], fuelling negative stereotypes and creating a simplistic understanding of the Nigerian diaspora in China. By looking beyond the headlines, this article seeks to contribute to a narrative closer to the lived experiences of Nigerian migrants in China.[2]

Nigerian migration to China did not begin in earnest until the 1990s. Ibeh[3], who could be considered one of the founding members of the Nigerian community in China, was one of the first Nigerians to migrate to the major port city of Guangzhou, about 120 kilometres northwest of Hong Kong. He arrived in 1996, after sojourning in Indonesia, Singapore and South Korea for work. It was a time when China just had started to open up to the international community as a result of economic reforms in the 1980s.

The time of Ibeh’s arrival was the beginning of waves of Nigerian migration to China for business, education and other reasons, spurred by the country’s economic growth and growing presence on the African continent. He fondly remembers how easy it was to get a Chinese visa and to extend it as many times as one wished. But it wasn’t all smooth sailing. Because of the relative isolation China had experienced, many Chinese were unprepared for the growing influx of Africans into their communities. Neither did the Chinese government have laws and policies in place to regulate migration at the time. Only in response to rising social tension in cities like Guangzhou did the Chinese government begin to tighten visa policies in the 2000s.[4] The visa-on-arrival policy ended and only short-term visas were issued.[5] Non-tourist visas, such as for business or employment, became more difficult to obtain. Unlike British nationals, for example, who can apply for 10-year visas with multiple entries, Nigerians nowadays usually only get 14- to 30-day single-entry visas. In addition, visa extensions in cities like Guangzhou are impossible to obtain for Nigerians and other Africans, but not for other nationals.[6] Staying in China now also requires police registration and regular status checks.

These stringent policies combined pushed many Nigerians, particularly those who arrived in the late 2000s, into the underground economy in order to survive. Seeking a better life and economic opportunities, many have inadvertently become “illegals”, fuelling the crime narrative that dominates perspectives about Nigerians in China.

A Community is Born

The actual size of the Nigerian community in China is difficult to determine, with the Nigerian government estimating it to be 10,000 in 2014.[7] The majority of long term Nigerian migrants in China settled in Guangzhou to do business. Guangzhou is strategically located between the Chinese mainland and Hong Kong, and the early arrivals also found its business culture easy to adapt to. China’s third-largest city has many small wholesale markets to buy goods for export that are easily negotiable, transportation is advanced, and the cost of living is not too high. Some Nigerians also feel that people in Guangzhou are more open minded than in other cities, making for easier working relations between Nigerians and Chinese businesspersons.

Due to its size and history, the Nigerian community in Guangzhou has become an important source of information and support to Nigerians who want to do business or who face other challenges in China. According to Ibeh, the need for a support system was born from the problems faced by the first group of Nigerian migrants in the 1990s. This included limited access to accommodation and healthcare, which was due to discrimination and language barriers as well as business fraud. From the late-1990s onwards, the community grew organically, combining decades of living and business experience in China.

The need for a more close-knit community became more pertinent when Chinese authorities changed their approach towards African migrants in the early 2000s. As the population of Nigerians increased, so did the social problems and tension with the local population. Around 2004, the older and more respected Nigerians decided to create a structured support and representation system that includes an elected president general and various executives. The community has also opened an office where Nigerians can register, make complaints or seek support.

Since then, community structures have delivered important responses in critical situations. When immigration checks and local mob violence led to the death of Nigerians in 2009[8] and 2012[9] – and in a context where crimes against Africans are all too often ignored by authorities – the community and other Africans came together to demand justice. When Isah, another Nigerian businessman, first arrived in China in 2012 and fell sick, it was information and support from the community that helped him to receive treatment without having documentation. When his local business partner reported him to police as undocumented and framed him for theft in 2013, causing the loss of all of his investment, the community supported him by communicating with authorities and helped him get back on his feet. In numerous similar cases, the community has provided support during arrests, deportation, business-related disputes, burials, and more.

The community also interfaces between the Nigerian embassy and the Chinese government. People over-staying their visas is a big problem and many Nigerians are arrested. The community buys plane tickets for over-stayers every six months, depending on the funds they have available and how many over-stayers have been in jail for a long time without the means to leave.

There is even an informal justice system, with elected judges and a task force of volunteers to implement the judges’ decisions. The decisions of the judges are binding on the members and are in accordance with Chinese laws and principles, which enables the community to live within Chinese rules as much as possible. Most of the cases resolved within the Nigerian community are business- related disputes and complaints, but when Nigerians commit crimes, the community may work with the Chinese police to find solutions. These functions have created a sense of pride and safety for Nigerians.

Despite the benefits it provides, the community is not without problems. Challenges include political disagreements, differences in opinion with the Nigerian consulate in Guangzhou, and insulation from other African communities. Youth unemployment is another big problem. Obi, a young businessman and student, believes that the lack of legal job opportunities for Nigerians and other Africans in China force some people to survive by drug-dealing and other illegal activities, fuelling stereotypes and media headlines.

Finding Success in a Foreign Place

Almost all members of the community are businesspeople running small, medium and large businesses. Despite severe discrimination, most have found success, notably in the shipping and handling of goods from China to Nigeria and other African countries, due to a trade boom over the last decade. Between 1996 and 2014, Chinese exports to Nigeria grew from USD185 million to over USD10 billion[10], placing China at the top of the list of Nigeria’s trading partners.

The older generation of Nigerian migrants are key investors in several Guangzhou businesses. From nothing, Ibeh was able to build an export business that grew to employ over 68 Chinese people in Guangzhou, as well as staff in Nigeria and other countries. Because he settled early in China, he never had the same visa or employment problems the younger generation faces. Within four years of migrating to China, Isah’s business grew by leaps and bounds, despite the challenges he faced as an undocumented migrant. Festus Mbisiogu, the founder of Blue Diamond Logistics and two other companies in China, is another businessman known for his success in business as well as his contributions to the community. Mbisiogu, like Ibeh, migrated to China in the 1990s to build his empire.

Undocumented Nigerians often partner with Chinese locals who act as the face of the business for ease of registration, thereby contributing to the local economy. Even without resident permits, they pay taxes, employ Chinese staff and rent offices, just like those who do have papers. Isah believes that, regardless of the multiple discriminations they have faced, the Nigerians’ success has led to a quiet acceptance and acknowledgement by Chinese society.

Most business owners also send money home and make investments in Nigeria. Isah, who claims to have made millions of yuan from his business, sent 80 percent of his earnings to lift his entire family out of poverty in Nigeria. Uche, a 20-year-old student who is also running a successful shipping business, has been taking care of his siblings in Nigeria since he arrived in China in 2013 and plans to finance their education in the United States. There are countless stories similar to theirs.

The community leaders have also become business mentors. Ibeh, for example, has advised many young Nigerians who have been empowered to start their own businesses legitimately and he envisions a structured mentorship programme that could increase the exchanges between China and Nigeria for mutual benefit and development.

Because many Nigerian business owners are invisible, even though they are bringing investments and creating employment, there is little awareness of the impact they have on the local economy, as well as in Nigeria. The crime-focused media discourse further obscures the dynamics in the community.

Driven by hard work, a strong sense of pride and the determination to become self-sufficient, many Nigerian migrants have become successful, forming a community with well-established and efficient community structures that were created to address the problems of Nigerians in China. The status quo of legality and documentation has not stopped them from pursuing their dreams of creating better futures for their families and supporting their wider communities in Nigeria.

The Nigerian government, like many other African governments, lacks the political will and foreign-policy resources to protect and promote the interests of its citizens in China. Thus, the community structures are also significant because they fill the gaps that the Chinese and Nigerian governments cannot. Given their years of experience in China, the migrant community could well play a greater role in guiding Nigeria’s relationship with China. It is left to the Nigerian government to seek out their expertise to contribute to the development of Nigeria’s economy and Sino-Nigerian relations.

[2] The data in this article is based on interviews with Nigerian and other African migrants, international organisations, churches, businesses and others, carried out between 2015 and 2016 in Beijing and Guangzhou by Oreva Olakpe.

[3] Names have been changed to protect the identities of interviewees.

[4] Bodomo A, The African Trading Community in Guangzhou: An Emerging Bridge for Africa-China Relations, The China Quarterly, Vol. 203, 2010. 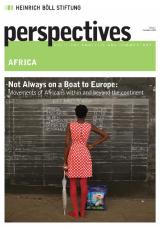