Open Secrets: Unaccountable
South Africa's arms trade regulator has failed in its mandate to monitor the export of weapons to countries that, among other things, abuse human rights, or wage war against their own citizens. This begs the question, who will guard the guards themselves?

Inequality, poverty and the failure to deliver quality public services such as health and education threaten to undo democratic gains in the region.  In response, the Democracy & Social Justice programme seeks to strengthen the political voice of marginalised groups advocating for socio-economic rights and the equitable use of state resources to address injustice.

The programme supports citizen groups’ engagement with policy, analysis of budgets and social audits.  It also supports citizen networks and network building that seek to build public ownership of democratic institutions, and hold them to account for their role in building a just society. The programme specifically targets social movements and membership based organisations.

As feminism is a central tenet of all HBF programmes, this programme works towards the vision of a society and institutions which actively respond to – and attempt to correct – the political and socio-economic realities of gender inequality.

Open Secrets: Unaccountable
Companies with South African links have been allowed to supply Saudi Arabia and its allies with weapons — despite the humanitarian destruction the war in Yemen has wrought.

Analysis
As the world launched fireworks to celebrate the arrival of 2019, there was no ‘happy new year’ in Zimbabwe.
By McDonald Lewanika

Once Again Hope Deferred in Zim

Analysis
The hope that was generated by the removal of Robert Mugabe from power in the November coup in Zimbabwe was always provisional and tainted by the persistence of Zanu PF’s legacy.
By Brian Raftopoulos

Dossier
On the 8th of May South Africans headed to the polls for the 6th time since 1994. Against the backdrop of high unemployment, loadshedding, severe water shortages across the country and daily testimonies narrating how officials, political leaders and business persons hijacked state institutions and finances for personal benefit, a record number of parties contested the elections. While President Cyril Ramaphosa has promised a ‘new dawn’ and ‘self-correction’, the ANC is facing a political landscape that is more competitive, and an electorate that is less likely to turn out.

South Africa: 25 years after the end of apartheid

Dossier
The end of the apartheid regime in 1994 marked the beginning of hope for political and economic change in South Africa. 25 years later, we take a look at what has remained of the initial spirit of optimism. This series of interviews voices the perspectives of civil society, academia and the media from South Africa and its former liberation allies Nigeria and Kenya. They underline the importance of the fight against apartheid throughout Africa and the challenges facing South Africa today. 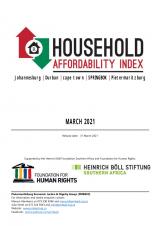 Bain & Company – the KGB of consulting

Open Secrets: Unaccountable
Bain &amp; Company is one of several powerful multinational corporations at the centre of corruption and State Capture in South Africa. Bain enabled the wrecking of the South African Revenue Service, contributing to economic hardship for all South Africans. Placing profit over principle, Bain remains unaccountable and continues to dodge responsibility for serious economic crimes.

Credit Suisse: An enabler of mega-looting in Mozambique?

Open Secrets: Unaccountable
Mozambique has been battered by devastating cyclones and an armed insurgency. The backdrop to this is a state battling State Capture. This involves a coterie of corrupt politicians. However, at the centre of one of Africa’s biggest corruption scandals is a Swiss banking behemoth – Credit Suisse.

Open Secrets: Unaccountable
It has often appeared that the desire of the regulatory board for auditors to protect its members overshadows its responsibility to inform the public about dodgy auditors.

Open Secrets: Unaccountable
The Big Four auditing firms - Deloitte, EY, KPMG and PwC - played a systemic role in economic crimes and State Capture. The evidence suggests that these firms have prioritised profit over professional duties and the law. Accountability and reform of the industry is thus essential.

Open Secrets: Unaccountable
The ‘Big Four’ audit firms – Deloitte, EY, KPMG and PwC – all play a systemic role in economic crimes and State Capture. The evidence suggests that these firms have prioritised profit over professional duties and the law. Accountability and reform of the industry are thus essential. In July, Open Secrets released the latest Corporations and Economic Crime Report (CECR). Volume 2 — The Auditors — draws on information from Open Secrets’ investigations and publicly available information to illustrate the crisis faced by the auditing industry and how this impacts the public. Last week’s instalment in the Unaccountable series examined the role of Deloitte in audit failure and dodgy consulting contracts at Steinhoff, Tongaat-Hulett and Eskom. This week, we focus on EY.

Deloot – how Deloitte gets away with it

Open Secrets: Unaccountable
The ‘Big Four’ audit firms – Deloitte, EY, KPMG and PwC – all play a systemic role in economic crimes and State Capture. The evidence suggests that these firms have prioritised profit over professional duties and the law. Accountability and reform of the industry are thus essential.

Open Secrets: Unaccountable
The Arms Deal was never only about Jacob Zuma and his sweetheart relationship with French arms company Thales. We now have even more proof that it was rotten to the core and demands accountability.

BAE Systems – (Profit) before anything else

Open Secrets: Unaccountable
This is an instalment in Open Secrets’ series detailing BAE Systems’ network of middlemen and agents who were paid generously in return for their political connections and influence during South Africa’s 1999 Arms Deal. This week, we turn our focus from the individual middlemen who profited, to the UK mega arms corporation pulling the strings at the centre of the network of covert partners, offshore companies and secretive, but highly lucrative, money transfers. BAE used its network first, to ensure it won the most lucrative part of the Arms Deal, and then later to avoid accountability for the alleged bribe payments upon which its selection relied. With its modus operandi laid bare, and the evidence overwhelming, there is no reason for BAE to remain unaccountable.

Open Secrets: Unaccountable
This is the second in a three-part Open Secrets series detailing the lucrative relationship between BAE Systems and its covert international network of middlemen. As we saw in Unaccountable 00012, BAE, like many European arms corporations looking to profit from South Africa’s 1999 Arms Deal, paid well-connected middlemen and agents vast sums of money to guarantee access to politicians and key decision-makers. This focuses on another of these middlemen – Fana Hlongwane.

Open Secrets: Unaccountable
This week, Open Secrets continues to profile the corporations and individuals implicated in corruption in the 1999 Arms Deal but yet to be held to account. The European arms corporations that profited from the deal used a similar modus operandi – pay well-connected middlemen and agents to guarantee access to politicians and key decision-makers. This week we turn the spotlight onto John Bredenkamp, who was contracted by British arms giant BAE Systems in relation to the Arms Deal. This is the first in a three-part series detailing the lucrative relationship between BAE Systems and its covert international network of middlemen.

Media Alert
Pietermaritzburg Pensioners travel by bus from Pietermaritzburg to Parliament in Cape Town to ask government to provide all pensioners with a bonus in December and to increase pensions to the level of a living wage. 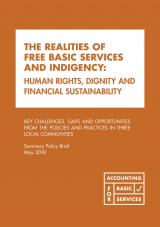 This brief highlights key challenges and gaps between the intended policies and how they are actually implemented, drawing on some lessons from three municipalities in South Africa.

In the news
The fight to exercise ones’ rights is never an easy one, and this is what the community of Glenmore has found out in the last two-and-a-half years.